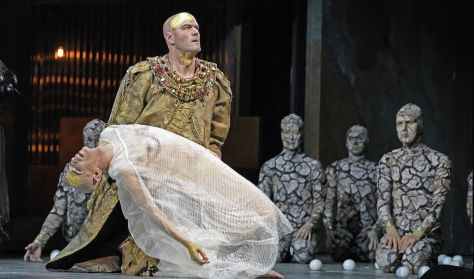 Akhnaten - The MET Live in HD

Star countertenor Anthony Roth Costanzo is the title pharaoh, the revolutionary ruler who transformed ancient Egypt, with the striking mezzo-soprano J’Nai Bridges in her Met debut as his wife, Nefertiti. To match the opera’s hypnotic, ritualistic music, McDermott has created an arresting vision that includes a virtuosic company of acrobats and jugglers.

Akhnaten is one of Philip Glass’s three large-scale operas based on a “big idea,” in this case monotheism, following Einstein on the Beach, which dealt with new notions of time and space, and Satyagraha, which explored the spiritual and political revelation of non-violence. Satyagraha and Akhnaten, especially, deal largely with the unseen forces affecting the inner (psychological), interpersonal (political), and universal (mystical) aspects of existence, subjects that are uniquely portrayed by the composer’s entrancing musical lines.

Philip Glass (b. 1937) is a prolific and influential American composer whose diverse body of work has included film scores, chamber music, music for dance and other theatrical pieces, and various forms of opera. For the libretto, Glass worked with a team of collaborators to create a text that incorporates ancient inscriptions and letters, the Bible’s Psalm 104, and a Fodor guide to Egypt.