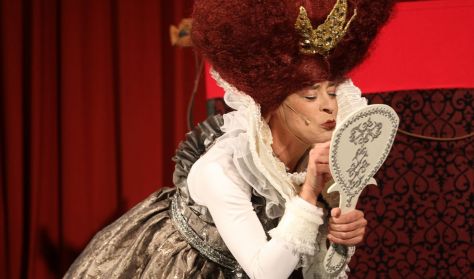 Four Fables and A Queen

A comedy in mime and words

Four stories wrapped in a fable: A comedy in mime and words for eight animals and one queen. A virtuous combination of words in English and Greek, with movement and drama that captivate both children and adults. A multi-awarded performance from Israel that has travelled all over the world.

The announcer welcomes you all, to the show! In the play you shall see one actress playing 9 different characters- some are not human, some not very smart, but they are all flash and blood, and they all have a hart:

Lion, Mouse, Fox, Crow, Hare, Tortoise, Goat, Other Goat
And one Queen-Judge, who does not want to be Queen –Judge at all….

The play takes place in Animal Court, in the forest. Animals appear before the Queen Judge, who is busy too busy, looking for her lost reflection in the mirror.