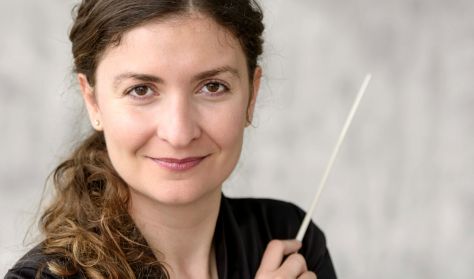 Under the baton of conductor Zoe Tsokanou and the CySO’s principal trumpetist, Gareth Griffiths, as the soloist, the CySO proposes a programme purely dedicated to music for wind instruments. The concert presents a fine selection of three pieces composed between 1878 and 1974 featuring characteristic sound colors from the composers’ countries of origin: Antonín Dvořák (Bohemia), Gordon Jacob (England), and Jean Francaix (France).

Dvořák’s Serenade for Wind Instrument in D minor (1878) is a magnificent work whose composition was inspired by one of Mozart’s wind serenades.

Francaix’s Le gay Paris (1974) for trumpet and wind ensemble is a light-hearted piece full of humorous dialogues between the soloist and the wind instruments.

We close our concert with Jacob’s Old Wine in New Bottles (1959) that is based on four early English folk songs, to which the composer adds his own unique musical twist, thus making them all the more enjoyable and fun.