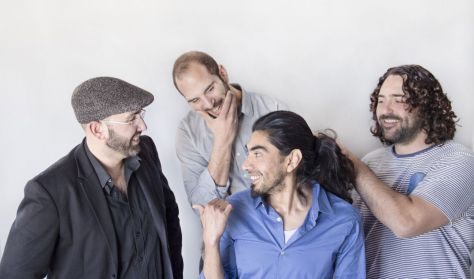 Following the long tradition of carnival dances and events that Rialto offered to the Limassol citizens as a cinema, the Rialto Theatre revive the carnival spirit through Macumba Plus group and presents live from its stage Latin, salsa and Cuban music.

With a high carnival mood, the six great musicians of the band - four Cypriots, one Chilean and one Cuban - with a strong stage presence and communicative character, are ready to entice us to dance to their explosive rhythms, even if we are alone in our house!

The concert will take place on Saturday, March 6, live at the Rialto Theater with the allowed number of viewers and simultaneousl will be broadcast livestreaming. The concert will be open and available for free at the Rialto Theatre channel on youtube until March 14, to accompany us throughout the carnival period, offering us nice music, fun and optimism, characteristic elements of the carnival spirit which , especially today, we all need.

Macumba group is a collaboration of the Chilean bassist Rodrigo Cáceres and the three Cypriot musicians, Elias Ioannou, Giorgos Morfitis and Rodos Panagiotou. They have brought a different approach to Latin rhythms, Afro-Cuban and Brazilian funk mixed-up with jazz. They have already released their first CD Album entitled "Como Jugando".

The band is strengthened in the concert at the Rialto Theatre by the well known Cypriot musician George Koulas and the explosive Cuban singer Pedro-Son Caliente.

Rodos Panagiotou is an acclaimed Cypriot drummer, coming from a family of musicians. He shows up on stage at the early age of 10. After studying for several years at the Hellenic Conservatory and the Rotterdam Conservatory in the Netherlands, he specializes in Latin-Jazz & World music and founded the Brazilian percussion group Batukinio.

For the last 10 years he has been teaching at the European University of Cyprus and the University of Nicosia. At the same time, he cooperates with popular music groups such as Blue Wire & New Dimensions, while recording and touring with the well-known composer Andreas Georgiou. He has been cooperating with many great Greek and foreign musicians.

Rodrigo Cáceres is a self-taught Chilean musician, known in the latin, jazz, flamenco and world music scene internationally. He has been touring since he was 17 years old in Europe, Latin America and Asia. In Chile he colaborated with the iconic Jazz trombonist Héctor Briceño Parquimetro and in Sri Lanka with the famous Ethnic Jazz band ‘Naadro’.

During his stay in Spain, he worked closely with Rubem Dantas (drummer of Paco de Lucia), who introduced Peruvian cajón to flamenco music. Highly acclaimed in the Spanish music scene, he records and tours with big names and appears at popular festivals. In Cyprus, where he has been living for the last few years, he has appeared in various festivals and he has participated in the musical group of the composer Andreas Georgiou.

Elias Ioannou was born in Limassol. He studied music at Codarts University in Rotterdam, specializing in trumpet and jazz. He has attended master classes with internationally renowned musicians such as Barry Harris, Joshua Redman, Snarky Puppy, Aaron Parks while being introduced to Latin Improvisation alongside the famous trumpeter Amik Querra.

Giorgos Morfitis born in Limassol and has been taking classical piano lessons since he was 6 years old. He studied jazz at the Filippos Naka School in Athens and later at the I.S.A Conservatory in Cuba focusing on classical composition, orchestration & Jazz / Latin Performance. In 2004 he immersed himself in the genre, completing the BA & MA at the Codarts Conservatory in Rotterdam.

In 2012 he moved to Madrid where he teached modern music at Gredos College & Katarina Gurska Conservatory. He has participated in many well-known festivals in Europe and has appeared in state television in Madrid. After his return to Cyprus, he appears regularly with different musical groups.

George Koulas: Drummer, percussionist, performer and music creator has been active playing and creating music for the last 35 years in Cyprus and abroad. He graduated at Codarts in Holland in 2002 with MA and BA.

For last 16 years he has been collaborating with dancer and choreographer Miilena Ugren Koulas creating music for all of her pieces. George has been artistic director of Paradise Jazz Festival for last 8 years. Through his numerous collaborations with international and domestic artists he performed in Cyprus, Greece, Turkey, Lebanon, Sweden, Belgium, Luxembourg, France, Holland, Italy, Croatia, Serbia, Czech Republic, Spain, Germany, New Orleans, Boston etc.

Pedro-Son Caliente, originally from Havana, Cuba, has been living in Cyprus for the last few years. He collaborates with Cypriot musicians, in appearances throughout Cyprus on the Latin music scene, carrying Cuban sounds and Cuban passion for music and dance.

* The concert will be available online for free, until March 14, in the Rialto Theater channel at youtube.