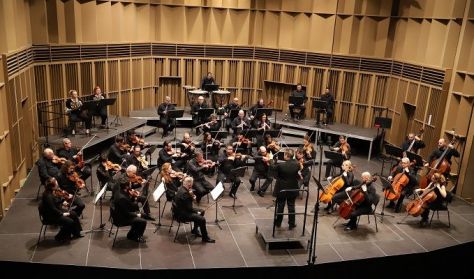 In its third concert of the series “Music from the Theatres of Cyprus”, the CySO presents an attractive programme with works by Tchaikovsky and Beethoven.

The concert will take place on Friday, March 12 at 19:00 at the Rialto Theatre with the allowed number of 50 viewers and will be broadcast simultaneously online by the Theatre's YouTube channel (Rialto Theatre Limassol) with free access.

“It is a heartfelt piece and so, I dare to think, is not lacking in real qualities” - thus Tchaikovsky describes his Serenade for strings in C major (1880) to his patron. We could not agree more. Consisting of four contrasting movements, the music combines elegance with intense emotion and is profuse with melodic invention, especially in the popular Valse. In our days, it has also been used as music for the ballet and films.

The Second Symphony is one of Beethoven’s most energetic, cheerful, and outgoing works, full of humour and vitality. According to Lewis Lockwood, researcher of Beethoven, “This symphony signaled that from now on in Beethoven's works power and lyricism in extreme forms were to be unleashed as never before...”

The distinguished conductor Michalis Economou joins the CySO in this programme.

Michalis Economou is one of the most promising conductors and composers of his generation, a significant figure of the Greek musical scene. He is former Music Director of the Qatar Philharmonic Orchestra, Chief Conductor of the Athens Symphony Orchestra, Principal Guest Conductor of the Greek Radio Symphony Orchestra. He has also signed an exclusive contract for the annual Placido Domingo’s “Operalia” competition winner’s gala in various countries. A regular conductor of all major Greek orchestras he has also worked with many other symphony orchestras and ensembles in Europe, the United States and Asia.

As a composer, he is winner of eleven national and international competitions, including the ALEA III and the Dimitri Mitropoulos International Composition Competitions. His works have been performed all over the world and he has been commissioned to compose music for Carnegie Hall and Athens Megaron Concert Hall, among other venues.

Born in Greece in 1973, he studied musicology at Athens University as well as violin, advanced theory and composition at the National Conservatory of Athens. He received five scholarships when he moved to Boston in 1997, where he studied orchestral conducting and composition with Lukas Foss, Theodore Antoniou and David Hoose received his “Doctor of Musical Arts” in Composition. His conducting mentors include the highly acclaimed international figures Jorma Panula and Gianluigi Gelmetti.

Maestro Economou won the Music Directorship at the Qatar Philharmonic Orchestra in 2011 with the full support of the orchestra following a secret vote of the musicians. During his tenure he conducted the orchestra in more than forty different programmes, including recordings of Mahler’s Symphony no. 2, Bartok's Concerto for Orchestra, Khalife's Return Symphony and other works under Naxos label.

Michalis Economou teaches orchestral conducting in Athens. He is the founder and director of the annual National Conducting Masterclass with the Athens Symphony Orchestra that attracts more than a hundred young conductors per season. In May 2004 he was elected Chairman and Artistic Director of the Music Department at the National Technical University of Athens, a position that he holds to this day. He is also an active Artist of the recently founded organization EMMA for Peace (Euro Mediterranean Music Academy) under the honourary presidency of Riccardo Muti, founded by cultural entrepreneur Paolo Petrocelli.

Since 2012 Michalis Economou is represented internationally by IMG Artists.