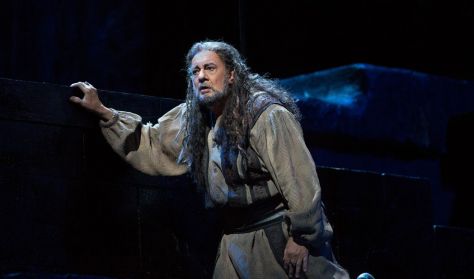 Nabucco - THE MET: Live in HD

The legendary Plácido Domingo brings another new baritone role to the Met under the baton of his longtime collaborator James Levine. Liudmyla Monastyrska is Abigaille, the warrior woman determined to rule empires, and Jamie Barton is the heroic Fenena. Dmitri Belosselskiy is the stentorian voice of the oppressed Hebrew people.

World premiere: Milan, Teatro alla Scala, 1842. The success of Verdi’s third opera, a stirring drama about the fall of ancient Jerusalem at the hands of Nebuchadnezzar (Nabucco), catapulted the 28-year-old composer to international fame. The music and Verdi himself were subsumed into a surge of patriotic fervor culminating in the foundation of the modern nation of Italy. Specifically, the Chorus of the Hebrew Slaves (“Va, pensiero”), in which the Israelites express their longing for their homeland, came to stand for the country’s aspirations for unity and that exciting era in Italian history, the Risorgimento, or “Resurgence.”

Jerusalem, 6th century B.C. The Israelites are praying for help against Nabucco (Nebuchadnezzar), king of Babylon, who has attacked them and is vandalizing the city. Zaccaria, their high priest, appears with Nabucco’s daughter, Fenena, whom the Hebrews hold hostage. He reassures his people that the Lord will not forsake them. As the Israelites leave, Ismaele, nephew of the King of Jerusalem, is left alone with Fenena. The two fell in love during Ismaele’s imprisonment in Babylon, and Fenena helped him escape and followed him to Jerusalem. Their conversation is interrupted by the sudden appearance of Fenena’s half-sister, Abigaille, and a band of disguised Babylonian soldiers. Abigaille, who is also in love with Ismaele, tells him that she can save his people if he will return her love, but he refuses. The Israelites rush back into the temple in a panic. When Nabucco enters with his warriors, Zaccaria confronts him, threatening to kill Fenena. Ismaele disarms the priest and delivers Fenena to her father. Nabucco orders the destruction of the temple.

Nabucco has appointed Fenena regent while he is away at the wars. Abigaille, back in the royal palace in Babylon, has found a document saying that she is not the king’s daughter but the child of slaves. Foreseeing a future in which Fenena and Ismaele will rule together over Babylon, she swears vengeance on Nabucco and Fenena. The High Priest of Baal arrives with news that Fenena has freed the Israelite prisoners. As a result of her treason, he offers the throne to Abigaille and proposes to spread the rumor that Nabucco has fallen in battle.

Elsewhere in the palace, Zaccaria prays for inspiration to persuade the Babylonians to give up their false idols. Ismaele enters and the assembled Levites accuse him of treachery, but Zaccaria announces that he has been pardoned for saving a fellow Israelite—the newly converted Fenena. An officer rushes in to warn Fenena that the king is dead and her life is in danger. Before she can escape, the High Priest of Baal arrives with Abigaille and the Babylonians, who proclaim Abigaille ruler. She is about to crown herself when, to the astonishment of all, Nabucco appears. He snatches the crown from her, faces the crowd and declares himself not only their king but their god. For this blasphemy, a thunderbolt strikes him down. Abigaille, triumphant, retrieves the crown for herself.

The Babylonians hail Abigaille as their ruler. The High Priest urges her to have the Israelites killed, but before she can give the order, the disheveled Nabucco wanders in. Abigaille dismisses the crowd and, alone with Nabucco, tricks him into signing the death warrant for the captive Israelites. He asks what will happen to Fenena, and Abigaille replies that she too must die. When Nabucco tries to find in his garments the document proving Abigaille’s ancestry, she produces it and tears it to pieces. He pleads in vain for Fenena’s life.

Along the banks of the Euphrates, the Israelites rest from forced labor, their thoughts turning to their homeland. Zaccaria predicts they will overcome captivity and obliterate Babylon with the help of God.

From a window in his apartment, where he has been locked up by Abigaille, Nabucco watches Fenena and the Israelites being led to execution. Desperate, he prays to the god of Israel for forgiveness, pledging to convert himself and his people. His sanity restored, he forces open the door and summons his soldiers to regain the throne and save his daughter.

The Israelites are about to be executed. Fenena prays to be received into heaven when Nabucco rushes in and stops the sacrifice. Abigaille, full of remorse, takes poison and dies, confessing her crimes and praying to the god of Israel to pardon her. Nabucco announces his conversion and frees the Israelites, telling them to return to their native land and rebuild their temple. Israelites and Babylonians are united in praising God.

With the support of ANT1