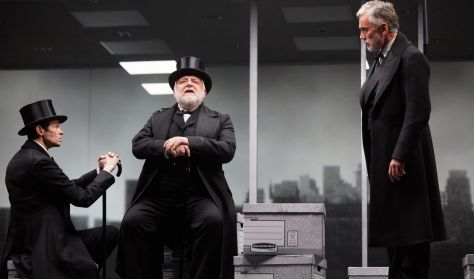 Opening of the new season of NT Live broadcasts at the Rialto Theater with the magnificent performance The Lehman Trilogy by Stefano Massini, adapted by Ben Power.

The story of a family and a company that changed the world, told in three parts on a single evening, broadcast from London’s West End. Academy Award-winner Sam Mendes (Skyfall, The Ferryman) directs Simon Russell Beale, Adam Godley and Ben Miles who play the Lehman Brothers, their sons and grandsons.

On a cold September morning in 1844 a young man from Bavaria stands on a New York dockside. Dreaming of a new life in the new world. He is joined by his two brothers and an American epic begins. 163 years later, the firm they establish – Lehman Brothers – spectacularly collapses into bankruptcy, and triggers the largest financial crisis in history.

Reviews:
'Theatre at its best. Sam Mendes triumphs.' Times
'What an astonishing evening! Engrossing play and an acting masterclass.' Guardian
'I urge you to see this extraordinary theatrical experience.' Daily Telegraph
‘Magnificent. A genuinely epic production. Three of the most virtuosic performances you’re ever likely to see.’ The New York Times
'This is theatrical storytelling at its most thrilling.' The Hollywood Reporter