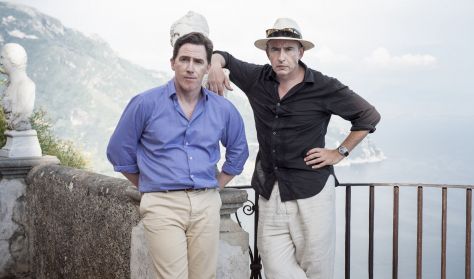 The Trip to Italy

Two men, six meals in six different places on a road trip around Italy. Two friends are commissioned by The Observer to go on a trip to Italy and write their own restaurant reviews for the newspaper. Along the way, they enjoy lively conversations about life, love, work and exile. A culinary odyssey and a cultural trip, during which the two friends follow in the footsteps of important films and English romantic poets Byron and Shelley in Italy.

The Trip to Italy is a 2014 British comedy film, written and directed by Michael Winterbottom. It is the sequel of Winterbottom's TV series The Trip, and similarly stars Steve Coogan and Rob Brydon as fictionalized versions of themselves. The film had its world premiere at the 2014 Sundance Film Festival on 20 January 2014. Following the premiere, a second TV series, also titled The Trip to Italy, broadcast on BBC Two.

The pleasant and funny Trip to Italy is a breathtaking sightseeing tour from Piedmont and Rome to Sicily, Amalfi and Capri. The two friends keep the basic features and chemistry they have in a dramatic relationship, highlighting male competitiveness, along with an automation of mutual understanding and friendship of years, reinforced by their common profession and their parallel course.

With delectable threats by Sousou@Rialto and Madam Bar