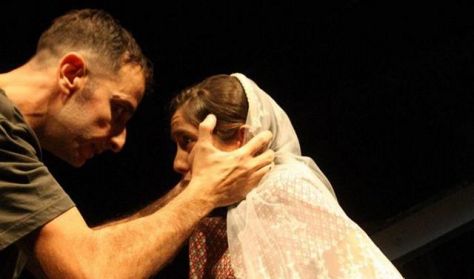 Yiannis Mavritsakis’ «Wolfgang» is inspired by true events that took place in Austria. A 36-year-old man man kidnaps a ten-year-old girl and holds her hostage in a basement for about eight years. When the girl escapes, the man commits suicide. She notes: “He was a part of my life, which is why I mourn him to a certain extent.”

It is in this very statement that the essence of this play lies, explains director Marios Mettis. “We are not looking to vindicate the culprit, we are merely trying to understand him. And if we were to accept that none of us are born evil, then we need to look to find the reasons that led a good, by nature, human being to commit such a heinous crime.  The offender will of course be punished as society and its ethics require, but it is also our duty to seek the human behind the inhumane act.” Even though the writer is present a true event, he is dealing with the psychological background of the offender instead of the victim. He is trying to explain how a person, who presents an apparently normal image to society, manages to lead a double life without raising any suspicions. The main character, suffering from childhood trauma is in search of his ideal partner, trying to mold her characteristics and behavior himself right from scratch.  Yiannis Mavritsakis opts for this edition of the story in order to shed light on the psychological aftermath of such an act on both the culprit and the victim.

Yannis Mavritsakis’ «Wolfgang» will be staged in Cyprus for the first time.

Admission is not permitted to persons under the age of 15

With English and Turkish surtitles.