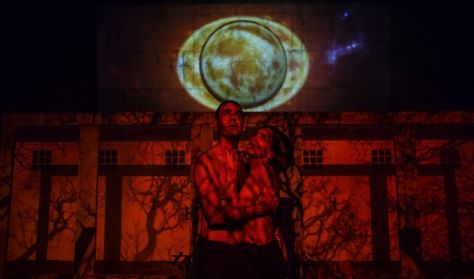 George Orwell’s prophetic tale is a daring adaptation by Robert Icke and Duncan Macmillan for the stage. A harsh yet extremely truthful manifesto against totalitarianism, a dystopian masterpiece on constructing a reality, misrepresenting the past, and controlling and freezing consciousness. A staggering text that is still relevant to our days, seventy-two years after it was first published.

The main character, Winston Smith, lives in the dark world of Oceania, and struggles, by every, means possible, to remain sane despite the suffocating surveillance regime of Big Brother, which strictly forbids people from thinking. Against this backdrop, he falls in love with Julia and cannot help but commit more and more Thoughtcrimes. Winston Smith thinks, remembers, imagines, and hopes. He longs for a world without Big Brother. However, any attempt to escape is futile.

* The performance contains harsh images and nudity.
**In Greek with English and Turkish Surtitles

After the Rain | Sergi Belbel I Dionysus Theatre

Where we rest Ι enacttheatre

A statue that traveled the world