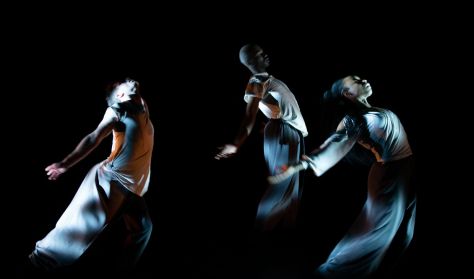 Silent Lines draws upon Maliphant’s studies and explorations in dance and anatomy using a unique mix of movement, projection and lighting. Silent Lines celebrates the range of poetic possibilities in movement, drawing on methodologies from internal and external movement disciplines, psyche and soma, and explores the visually rich and resonant connections between the microcosm and the macrocosm.

Russell Maliphant Dance Company was established in 1996 as the framework to initiate productions and to work with its own ensemble of dancers. Since that time, the company has received two Olivier awards, three South Bank Show awards and three Critics’ Circle National Dance awards for best modern choreography and one for best independent company, amongst many other national and international awards and nominations.

Russell Maliphant's work is characterised by a unique approach to flow and energy and an on-going exploration of the relationship between movement, light and music. For 20 years, Maliphant has worked closely with pioneering lighting designer Michael Hulls to explore and realise these ideas. Russell Maliphant and Michael Hulls are both Associate Artists of Sadler’s Wells.

In April 2018, the Russell Maliphant Dance Company became one of the Arts Council England’s National Portfolio Organisations. This brings an exciting new chapter to the company’s history, becoming Company in Residence at DanceEast, Ipswich.

All dance performances are part of the 22nd Cyprus Contemporary Dance Festival 2019, organized by the Cultural Services of the Ministry of Education and Culture and the Rialto Theater, with the collaboration of the embassies and the cultural centres of the participant countries.