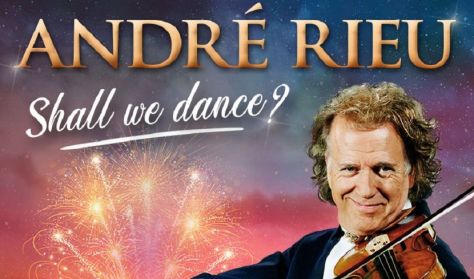 Millions of spectators around the world will have the opportunity to watch in recorded screening the 15th edition of André Rieu’s spectacular open air concert in his hometown Maastricht. André Rieu is one of the world’s most popular music artists. Together with his Johann Strauss Orchestra, he has turned his unique blend of classical and waltz music into a worldwide concert touring act, as successful as some of the biggest global pop and rock music acts, regularly appearing on the worldwide list of highest-grossing touring artists.

This year's theme on the Vrijthof is Shall We Dance? Andre takes it quite literally, inviting more than 300 professional dancers to dance to his greatest hit The Second Waltz. It's overwhelming to see the beauty of their elegant dance moves, in perfect synchronisation!!

André Rieu is quite simply a musical phenomenon like no other, a true King of Romance, having sold a massive 40 million CDs and DVDs and notched 30 Nr. 1 chart positions worldwide. Along with his 60-piece Johann Strauss Orchestra (the largest private orchestra in the world), André has created a global revival in waltz music, staging spectacular extravaganzas which are second to none. Having received over 480 Platinum Awards, three Classical Brit Awards for “Album of the Year” and billions of Youtube views, André is one of the biggest solo male touring artists in the world.