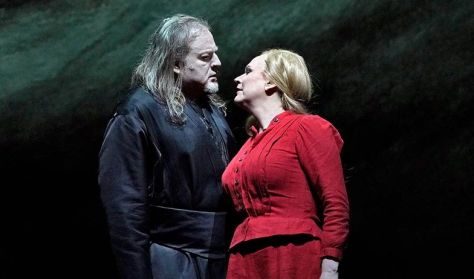 François Girard, whose revelatory 2013 take on Parsifal set the recent Met standard for Wagner stagings, now unveils a spellbinding new vision of the composer's tale of a cursed sea captain doomed to sail the open ocean for eternity—live in cinemas March 14. With sweeping sets by John Macfarlane, Girard’s new production turns the Met stage into a rich, layered tableau reminiscent of a vast oil painting.

The famous Valery Gergiev conducts a brilliant cast led by bass-baritone Evgeny Nikitin as the Dutchman, with German soprano Anja Kampe making her anticipated Met debut as the devoted Senta, whose selfless love is what the Dutchman seeks. Bass Franz-Josef Selig is her father, Daland, and tenor Sergey Skorokhodov is her deserted former lover, Erik.

Richard Wagner (1813–1883) was the controversial creator of music-drama masterpieces that stand at the center of today’s operatic repertory. An artistic revolutionary who reimagined every supposition about theater, Wagner insisted that words and music were equals in his works. This approach led to the idea of the Gesamtkunstwerk, or “total work of art,” combining music, poetry, architecture, painting, and other disciplines, a notion that has had an impact on creative fields far beyond opera.

Act I
Daland’s ship seeks shelter from a storm on the Norwegian coast. An otherworldly stranger appears and reflects on his fate: Once every seven years he may leave his ship to find a wife. If she is faithful, she will redeem him. If not, he must sail the ocean till Judgment Day. The stranger introduces himself to Daland as “a Dutchman.” When he learns that Daland has a daughter, he asks for her hand in marriage.

Act II
Senta, Daland’s daughter, is captivated by a portrait of the Dutchman. She sings a ballad that reveals that the curse was put upon him for a blasphemous oath. To the horror of the hunter Erik, who hopes to marry her, she declares that she will be the one to save him. Daland arrives with the Dutchman. He and Senta are transfixed by each other. He asks if she will accept him, unaware that she realizes who he is. Senta vows to be faithful unto death.

Act III
The celebrating villagers revelry is soon interrupted by supernatural apparitions. Erik pleads with Senta not to marry the stranger. Overhearing this, the Dutchman loses hope and prepares to return to the sea. When Senta tries to stop him, he reveals his identity. She replies that she knows who he is. As he departs forever, she throws herself into the sea, faithful unto death.

In German, with Greek and English subtitles
Estimated Running time 139’