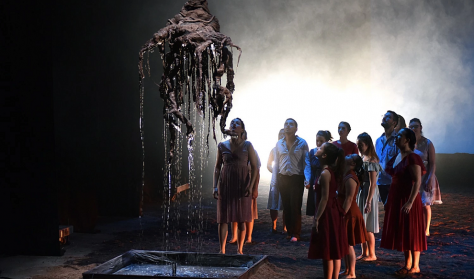 What is love? How do we experience it? Does everyone have access to love? How can such an extraordinary moment lead to an endless fantasy, to a thought that drives us mad? And how can love equate people - as different as they may be - in one and only condition, that of being in love?

Horse in love/ The Absurd of Love, after extensive research, attempts to record the course of an "... ah!", of an exclamation that accompanies love at first site, rejection, pain and pleasure. A performance about love, this "disability," that dominates, torpedoes, motivates and drives people crazy. An homage to real vitality, to libido, to a celebration of all senses suppressed by a rigidly perception of life. A show that overcomes social barriers and hinders obstacles to talk about the instinct, the forbidden, the imagination, the soul. A performance that insists on the search of mutual love.

Horse in love/ The Absurd of Love is the third part of a theatrical trilogy entitled The Other Normal, which emerged from the crushing need of En Dynamei Theatre Ensemble to share their personal stories openly and explore the personal and universal aspects of human peculiarity through the light of an artistic event. The first part of the trilogy The Fan Man or How to dress an elephant, a production En Dynamei Theatre Ensemble, was presented at the Athens Epidaurus Festival (2015), while the second one, The "Other" Home, a production of the Onassis Cultural Centre, was presented at the 51st Dimitria Festival. All three productions are directed by Eleni Efthimiou. The Artistic Director of En Dynamei Theatre Ensemble is Eleni Dimopoulou.

Giota Tembridou’s text The Convention is included in the performance.

*The touring of the performance is funded by the Perform Europe Program ann Cyprus is presented in the context of “Beyond Disdance” Festival which is organized by Ypogeia Skini NGO.