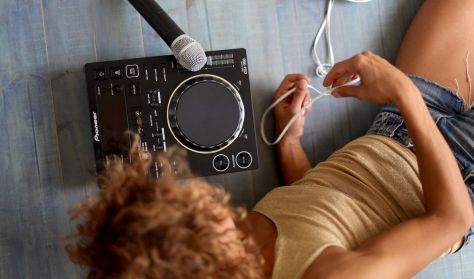 Εn Drasi presents the solo performance genes and tonic, created and performed by Evie Demetriou at Rialto Theatre, in Limassol, on the 27th and 28th of November.

With intense physicality and humour, genes and tonic questions social stereotypes and explores the connection between memory and identity. A landscape of movement, speech and sound that provokes and energises at the same time.

Sponsored by the Cultural Services of the Ministry of Education and Culture
Supported by Dance House Lemesos
Media Sponsors: CYBC, Kanali 6

Evie’s work can be characterised by the desire to question and challenge the boundaries of conventional dance. In every new piece of work the artist challenges her own limits as well as the spectators’, creating a space of interaction and communication.

She studied dance and performance at the Laban Centre in London and with scholarship at Limon Institute in New York. She is a 2004 Danceweb scholarship recipient, a travel grant recipient from the E-motional European Programme 2011-2014 . She was also an invited artist at “Act Your Age” programme, a europpean collaboration between Italy, Holland and Cyprus.

In 2004 together with Emily Papaloizou they formed En drasi dnace company, the umbrella which host their independent choreographic works and projects.

She has also contributed in the development of contemporary dance in Cyprus, as one of the founding members of the Dance House Lemesos and member of New Movement of Dance Groups, Choreographers & Dancers (2006-2010, 2012 -14).