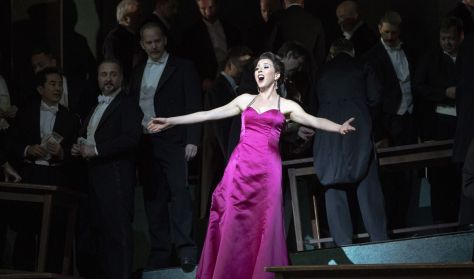 Manon - The MET Live in HD

Opening of the award-winning series of the MET: Live in HD programme, broadcast in more than 2.200 cinemas across 70 countries.

Exhilarating soprano Lisette Oropesa stars as the irresistible title character, the tragic beauty who yearns for the finer things in life, in Laurent Pelly’s revealing production. Tenor Michael Fabiano is the besotted Chevalier des Grieux, whose desperate love for Manon proves their undoing.

Jules Massenet (1842–1912), a French composer wildly popular in his day, was noted for his operas, songs, and oratorios. While Manon has maintained a steady place in the repertory, in recent decades, several of his other operas, especially Werther (1892) and Thaïs (1894), have been performed more frequently. His librettists for Manon were Henri Meilhac (1831–1897) and Philippe Gille (1831–1901), who adapted the hugely influential novel L’Histoire du Chevalier des Grieux et de Manon Lescaut by the colorful Abbé Prévost (1697–1763).

In French, with Greek and English subtitles
Running time 232’