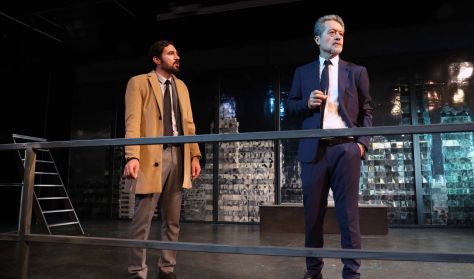 After the Rain | Sergi Belbel I Dionysus Theatre  more

Eight unnamed workers of an unnamed financial company sneak out onto the roof of the modern 49-story skyscraper where they work, in order to smoke. Smoking is one of the multiple prohibitions and pressures they endure at work, and symbolizes the oppression to which they are subjected at their workplace. A series of short yet shocking stories unravel on the roof of this building, leading to an unexpected twist.

A play about human relationships in an inhumane society reflecting the tensions, aggressive eroticism, underlying violence, but also people’s longing for connection. The main characters of Sergi Belbel’s fierce comedy may be successful, yet they are truly lonely, empty, weak and helpless, while their attempts for connection continuously end in failure.