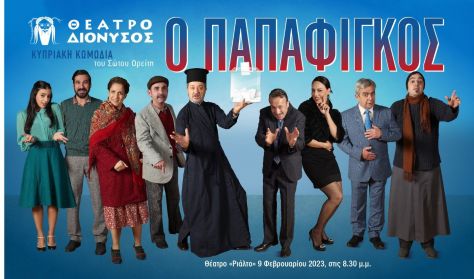 Papafigos is a Cypriot comedy based on Giovannino Guareschi’s Don Camillo adapted for stage and translated in the Cypriot dialect by Sotos Oritis.

In a small village in Nicosia, the inhabitants are getting ready for the upcoming community elections with tensions escalating since the result is most likely predetermined. Right-wing candidate Haritos claims the office of the community leader against his opponent, leftist Peponias. Convinced that he will most likely lose, Haritos devises and implements various tricks with the help of the church, also dragging along Papafigos, the otherwise honest, fair yet hot-tempered community priest. Similar tricks are also devised by the wing supporting Peponias who happens to be friends with Papafigos and was saved by the latter during the bi-communal conflict.

The unpredictable events and comic situations are quickly alternating, with Peponias being elected president of the community. However, amidst the rivalry and hostility between the two sides, a great love will be born between Peponias’ son and Papafigos’ adopted daughter, that will lead the two sides to reconciliation.