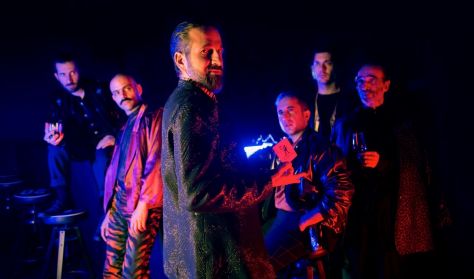 Gogol’s play The Gamblers. In Greek with English and Turkish surtitles

One night, in a provincial Russian town, an experienced gambler and notorious cheat arrives at an inn, looking for his next victim. There, he encounters over eager employees and a group of fellow card sharps who persuade him to join them. Unfortunately for him, he will end up being the loser in a game of deception in which it is impossible to tell a fraudster from an honest dealer.

Gogol began writing his comedy between 1832 and 1837, it was published in 1842, and first staged, albeit in a censored version, in 1843. As the writer satirically uncovers the dark corners of the human soul, everything is a frenetic game of masks and disguises, in which the lines between truth and falsehood, honour and infamy, and sincerity and hypocrisy are blurred and indistinct.

Director Maria Varnakkidou enters into its satirical spirit, identifying truths that resonate to this day and highlighting the decay that lies at the heart of the human condition.