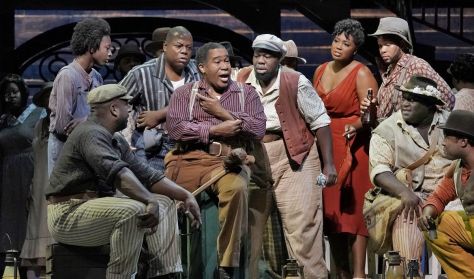 Porgy and Bess - The MET Live in HD

One of America’s favorite operas returns to the Met for the first time in nearly 30 years. James Robinson’s stylish production transports audiences to Catfish Row on the Charleston waterfront, vibrant with the music, dancing, emotion, and heartbreak of its inhabitants. “If you’re going to stage Gershwin’s opera, this is how,” raved the Guardian when the new production premiered in London in 2018.

World Premiere: Alvin Theatre, New York, 1935. A supremely American operatic masterpiece and the most ambitious work by one of the nation’s greatest musical talents, Porgy and Bess focus on the joys and struggles of a black neighborhood in Charleston, South Carolina, in the early 20th century. The overall combination of music, word, and idea among a complex blend of Americana makes this a unique and impressive work both within and beyond the operatic repertory.

Although the writing had proceeded smoothly, casting proved more difficult. Once he had assembled a cast of African American singers who could successfully balance jazz and operatic singing, it became clear that the opera world was not ready for a “black opera,” and the jazz world was not ready for opera at all. Most frustrating of all was that various Broadway producers with whom Gershwin had worked successfully for years insisted that he hire only white singers and put them in blackface. Only after much negotiating and a refusal to compromise on his black cast did Gershwin manage to arrange for an opening on Broadway, where his own reputation could carry the show. Even then, he lost money on the production, only recouping his expenses by the separate popularity of “Summertime” and other tunes from the opera when they were published separately as jazz songs.