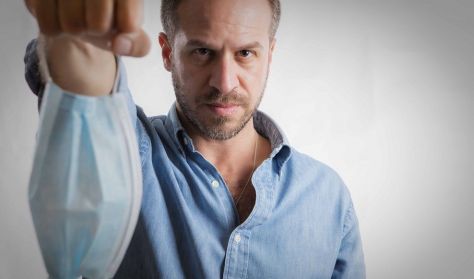 A COVID confession from, perhaps, the most important living British playwright

On the same day that the UK government finally made the first of two decisive interventions that led to a conspicuously late lockdown (in March 2020), David Hare contracted Covid-19. Nobody seemed to know much about it then, and many doctors are not altogether sure they know much more today. Suffering a pageant of apparently random symptoms, Hare recalls the delirium of his illness, which mixed with fear, dream, honest medicine and dishonest politics to create a monologue of furious urgency and power.

Andreas Araouzos returns to acting in English for this autobiographical persona by Hare and presents this to in a living-room library! He co-directs with Nicos Mylonas, who operates cameras live during performance, to convey the sensation “Screen is King” that now, more than ever, runs our lives. Mylonas also designs the lights, while Lakis Genethlis is dressing set and costume.

As theatre critic Nona Moleski (Phileleftheros, 09/03/2021) notes, Andreas Araouzos returns on stage with an English-speaking performance, entirely identifying with the writer, creating a sense of direct communication with this visionary, furious and courageous playwright, and exploiting the closeness of the audience, yet without addressing the viewer directly.

On Stage. Duration: 40 minutes. In English.