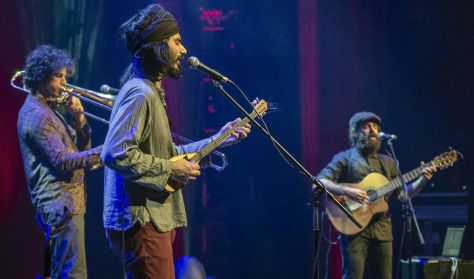 The group will present songs from their 3 studio albums, as well as a few unreleased songs from the upcoming album, which is scheduled to be released in early 2021.

Multi-award-winning group Monsieur Doumani was formed in 2012, in Nicosia, Cyprus. Coming from different musical backgrounds, but influenced by Cypriot tradition at various levels, the group composes Cypriot songs that draw inspiration from contemporary Cypriot society, as well as from the shaky condition of our era. The original identity of the project was determined by the adaptation of Cypriot traditional pieces, with a special contemporary colour in sound and mood, forming a style distinctively their own. Their live appearances in festivals and venues across the world (WOMAD, WOMEX, Sziget, Rudolstadt, Havana World Music Festival, Sur Jahan-India, Paradiso, MUPA) have been well received by diverse audiences and their music has been presented on radio and TV stations around the world. They received many awards including the "Best group award" - Songlines Music Awards in 2019 and the critics’ award - Andrea Parodi World Music Awards. Monsieur Doumani has released 3 studio albums, which gained them worldwide recognition.

General instructions for the audience:

To ensure the safety of all attendees, viewers must pre-book their seats, either online at  http://rialto.interticket.com/ or by calling the Rialto’s box office (Mon-Fri 10:00-13:00).

To avoid overcrowding, the viewers are kindly requested to arrive on time.

Free Entrance / Tickets must be obtained