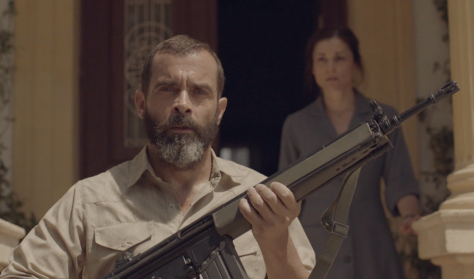 Located at the UN border dividing the Greek from the Turkish Cypriot side, the film captures the story of a family living on the verge of poverty and hunger, with the unemployed husband and father, an ex-military, struggling to get by. Confronted with his fragile soul, he has the support of his wife who desperately tries to take care of her old father-in-law and her two young children. In addition to the national and financial crisis, the debt-ridden family is also confronted with the contempt of the public services, which seem to ignore the father’s dismissal from the army due to psychological problems.

A tale of twists combining elements of police, action and social drama genres, “sprinkled” with a good dose of humour. Awarded with five prizes at Thessaloniki International Film Festival, Siege on Liperti Street is having its Cyprus premiere at Rialto’s summer cinema.