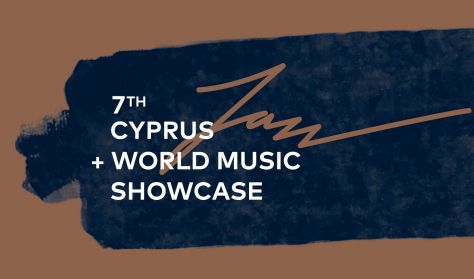 Due to the updated measures issued by the Ministry of Health, the 7th Jazz and World Music Showcase will take place only as live streaming, giving music lovers the opportunity to watch only online, a comprehensive picture of the island’s contemporary music scene.

The ten groups, who are active in the broader field of improvisational music and which have been selected to participate in the Showcase, are being intensively prepared to present the best possible artistic result. It should be noted that the two bands that would have opened the Jam Sessions, which due to the measures will not take place, will be the opening bands in the program of the respective day.

Present Almost Identified is a new music ensemble formed in Limassol in September 2020 with George Bizios on the electric guitar and compositions, Kyriacos Kestas on the double bass and Omiros Miltiadous on the drums. With this new trio, I wish to put together two very different processes; to approach guitar within a jazz ensemble in more ways than the conventional, while putting emphasis on each instrument separately and on what it has to offer. This approach is in contradiction with the traditional jazz band format, where the drums and the bass strictly perform the "obligations" of the rhythm section. Certainly, this does not mean that we distance ourselves from the tradition; on the contrary, we use it as a guideline on which we can build.

Yerolatsitis Organic Trio will present original compositions from their upcoming debut album, written by the brothers Antreas and Christos Yerolatsitis and arranged by all three members of the band. Through their songs, they explore and seek for an original sound, while respecting and incorporating the Jazz tradition in the composition, arrangement and performance. The Organ Trio setting is bringing fresh ideas to their music and pushes the trio to experiment with unknown musical landscapes.

The trio is a newly formed band, created by the brothers Antreas and Christos Yerolatsitis in 2020. The three musicians met for a jam in an organ trio setting in early 2020, and since then, they are busy creating a repertoire with their original music written specifically for the band’s unique sound. They also work on selected songs from the traditional jazz repertoire, arranged with modern ideas. The band’s sound is a blend of complex improvisations, accompanied by strong, nostalgic themes that are exciting, full and pleasing to the listener’s ear.

Ioanna Troullidou Jazz Quartet consists of Marios Toumbas on the piano, Michalis Messios on the double bass and Marios Spyrou on the drums.

Despite being a newly established band, the three musicians have been closely working together for the last 12 years and have performed in many concerts in Cyprus and abroad. The collaboration with Marios Spyrou started seven years ago. Ioanna Troullidou and her band will present for the first time original compositions in music and lyrics, as well as selected tunes from the Jazz repertoire.

Ultima Banda is a sextet based in Cyprus with its members being active musicians in the local and international jazz scene. The band members share similar tastes and influences, giving to the music a sense of coherence and unity, with each member leaving his own personal touch and stigma. Marios Spyrou and Greg Makamian form the rhythmic base of the group, enabling the melodies of Charis and Elias Ioannou to unfold. Marios Toumpas and Orestis Miaris step in to bind the two worlds, rhythm and melody, with their harmonies, thus completing the ensemble.

The music is based on the characteristics of hard bop, funk and blues. Inspired by the sounds of Lou Donaldson, Grant Green and Lee Morgan, the group aspires to combine the power, complex harmony and virtuosity of hard bop music, with the dancing nature and gospel character of funk. The project focuses on exploring the dynamics created by the merging of the elements that characterize these two genres.

The a.R project was formed for the recording of the new album of bassist Andreas Rodosthenous, which was recorded last May but not yet released. As a new project, it has been presented at the EUNIC Jazz Festival in Berlin with music from all three musicians.

Five years after the first recorded work titled Simplicity, Andreas Rodosthenous comes back, evolving and suggesting a new work titled Complexity. This project aspires to communicate today’s troubled and complex way of life, leading to estrangement. The music is instrumental, which on the one hand makes communication without spoken word more difficult, yet on the other, it creates an even greater challenge for the musicians and the audience alike, in finding a common language that can be supported with thoughts, expression and sound than just with notes.

This production is brand new since the compositions, created in the past five years by Andreas Rodosthenous, have not yet been released. It was recorded last May immediately after the end of the lockdown, but due to the Covid19 restrictions, the music has not yet been presented to the public in Cyprus. The a.R project consists of Christos Yerolatsitis on the piano, Stelios Xydias on the drums and Andreas Rodosthenous on the electric fretted and fretless bass. Their ten-year common path, their influences from the modern jazz music scene as well as the world music scene have brought them together, enabling them to acquire their own sound, both individually and as a trio.