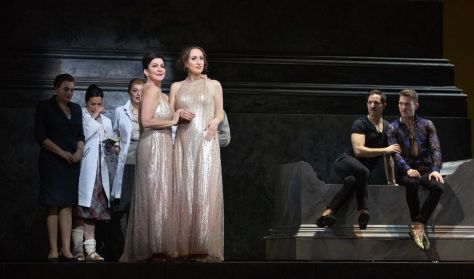 Agrippina - The MET Live in HD

Handel’s tale of intrigue and impropriety in ancient Rome receives its first Met performances. Sir David McVicar reconceives a production evoking a scandalous world in which the Roman Empire never fell but simply kept going right up to the present.

Holding a distorted mirror to contemporary society (as Handel did when he staged this opera), the production presents the corrupt intrigues of the political classes, brought to life by Joyce DiDonato as the power-hungry empress Agrippina, Brenda Rae as the scheming, seductive Poppea, and Kate Lindsey as the feckless teenager Nerone. Iestyn Davies portrays the ambitious officer Ottone, and Matthew Rose is the emperor Claudius, on whose vacated throne Agrippina is determined to install her son. Renowned for his interpretations of the Baroque repertoire, Harry Bicket conducts.

Joyce Didonato, the well-known American mezzo-soprano, is considered the biggest diva of her time, having won 3 Grammy Awards (8 nominations). “The staggering, joyful artistry of Joyce DiDonato reminds us that in any generation there are a few giants. Joyce is not only a great, brave and inspiring artist – one of the finest singers of our time- but she is also a transformative presence in the arts. Those who know her repertoire are in awe of her gifts, and those who know nothing of it are instantly engaged. Joyce sings and the world is suddenly brighter. She compels us to listen actively, to hear things anew.” Jake Heggie, Gramophone Multi-Grammy Award winner and 2018 Olivier Award winner for Outstanding Achievement in Opera, Kansas-born Joyce DiDonato entrances audiences across the globe and has been proclaimed “perhaps the most potent female singer of her generation” by the New Yorker. With a voice “nothing less than 24-carat gold” according to the Times, Joyce has soared to the top of the industry both as a performer and a fierce advocate for the arts, gaining international prominence in operas by Handel and Mozart, as well as through her wide-ranging, acclaimed discography. She is also widely acclaimed for the bel canto roles of Rossini and Donizetti.