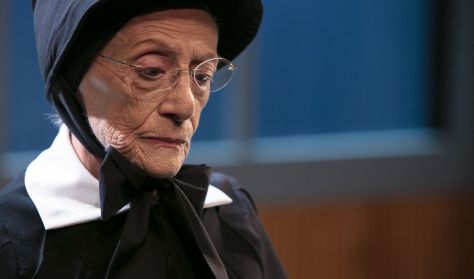 In the 1960s, in a Catholic school in the Bronx, the strict principal, Sister Aloysius, suspects that Father Flynn, a young progressive priest, is behaving inappropriately with one of the students. Her suspicions rapidly escalate until she is certain of his guilt. Unable to imagine that she might be mistaken, she does everything in her power to have Father Flynn removed from the school.

John Patrick Shanley’s renowned play Doubt, written in 2004, won both a Pulitzer Prize and a Tony Award, and became widely known through its film adaptation in 2008. As the title suggests, it illuminates the way the human mind struggles with its certainties.

A parable about the multifaceted nature of truth, and the grey areas between intentions and actions, and between good and evil, where doubt resides.

Assisted by an outstanding cast and creative team, including acclaimed actress Despina Bebedeli, director Andreas Araouzos skillfully explores the issues raised by the play and shows how they continue to resonate.

With English and Turkish surtitles.